“It is not often that one gets to sit in and listen to a pioneer. Today we are going to have that opportunity,” said senior Disabled American Veterans (DAV) leader, David Gorman, of the Honorable Robert Russell, the 2016 DAV Distinguished Speaker. Pioneer is an accurate description of Judge Russell, who founded the nation’s first Veterans Treatment Court in Buffalo, NY in 2008.   He started and continues to lead the movement to create adjunct court systems designed specifically to meet the needs of our nation’s veterans.

On Wednesday, November 9, 2016, Judge Russell delivered the 2016 DAV Distinguished Speaker Lecture at Harvard Law School. Reflecting on his January 2008 founding of the Erie County Veterans Treatment Court, Judge Russell explained that the idea came to him after noticing an increased number of veterans appearing before him in two existing problem-solving courts: the Drug Court and the Mental Health Court. He recognized that many veterans have a difficult time readjusting to life after service, a struggle which makes this community more vulnerable to mental health issues and addiction. The unique circumstances surrounding veterans inspired Judge Russell to ask the question, “What can we do to afford the best opportunities for our veterans?” His answer was to propose a court program designed specifically to address the underlying needs of veterans in the criminal justice system and connect them with the benefits and treatment that they earned in service.

Judge Russell’s lecture highlighted the positive impact of camaraderie and sense of community with the courts, calling them the “secret sauce” of the Veterans Treatment Courts’ success. He gave several examples of instances when the efforts of volunteer mentors, all of whom are veterans themselves, helped guide others through the rehabilitation process and overcome obstacles along the way. He found that there was “something about the beauty of service . . . that another veteran with the same symptoms and challenges are likely to come to [another] veteran’s aid to see how they can support,” and that this is truly what makes Veterans Treatment Courts unique.

In the past eight years, Veterans Treatment Courts have expanded to over 300 courts across the country, including several in the Commonwealth of Massachusetts. Judge Hogan Sullivan, the mother of a Marine Corps veteran, founded the first Massachusetts Veterans Treatment Court in Norfolk County in 2012, and was instrumental in expanding it throughout the state. Building upon Judge Hogan Sullivan’s success, Judge Sinnott, a former Navy Military Intelligence officer of 10 years, established the first Veterans Treatment Court in Boston in 2014. Professor Seamone, a former active duty Army Judge Advocate General (JAG) attorney and current Army Reserves officer, offered his perspective as a professor of law, saying that  “the court system has become responsible in [a] first response capacity…[including] everyone from judges to attorneys.” He encouraged attorneys to “adopt an enhanced client-counseling posture.”

The event was cohosted by the Veterans Legal Clinic at the Legal Services Center (LSC) of Harvard Law School and Harvard Law School’s Armed Forced Association. Introductory remarks were given by retired Executive Director of the DAV National Service and Legislative Headquarters, David Gorman.

“The growth of Veterans Treatment Courts highlights the unique needs of the veterans community and how judges and lawyers should think creatively about how we can best meet those needs,” said Betsy Gwin. “The Veterans Legal Clinic was thrilled to bring this important discussion to the law school with the participation of experts from across the country.” 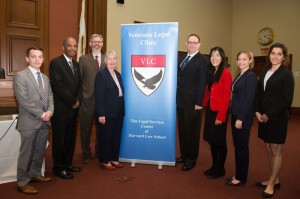 A recording of Judge Russell’s lecture and the following panel can be found in the links below: