A two-day summit at Harvard Law School in Cambridge, MA on the unique issues faced by LGBTQ veterans brought together dozens of experts on LGBTQ military and veterans matters from the US and Canada. The group of legal, political, and healthcare experts examined both past and present discriminatory policies — including Don’t Ask, Don’t Tell — and the proposed U.S. transgender service ban, currently on hold in the courts. 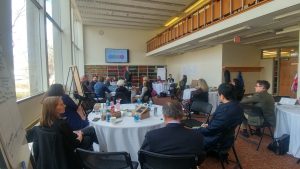 Canadian Attorneys John McKiggan and R. Douglas Elliott offered their perspectives as co-counsel on the groundbreaking matter of Satalic, et al v. Her Majesty the Queen, a successful national class action brought on behalf of current and former LGBTQ employees of the Canadian Armed Forces, Department of National Defence, and the Government of Canada. The action resulted in a record-breaking $145 million settlement and public apology from Prime Minister Justin Trudeau.

Weinstein, one of the few openly gay judges in the Maryland court system, was named Associate Judge, District Court of Maryland, District 1, Baltimore City, in 2002 and has been Judge-In- Charge of Eastside District Court since 2014. She served as a military intelligence officer in the Army from 1984 to 1986 until she was discharged because of her sexual orientation. Weinstein also created and is the current presiding Judge of the Baltimore City Veterans Treatment Court.  Neira was a surface warfare officer whose service included a tour of duty in mine warfare combat during Operation Desert Storm. After the Navy, she found a path toward nursing and law. She is the first transgender Navy veteran to have her DD-214 updated by order of the Navy to reflect her correct name. Additionally, she is the co-sponsor of the USNS HARVEY MILK. She is currently the Clinical Program Director at the John Hopkins Center for Transgender Health.

The summit also dovetailed with Harvard Law School’s (HLS) bicentennial celebration and engaged alumni in the second day’s “hackathon” discussions of potential ways to address past and current discrimination against LGBTQ service members and veterans.

“It is genuinely exciting to witness so many individuals committed to advancing the rights of LGBT veterans. Symposia like the HLS Hackathon give me hope that there are still possibilities for positive change within our society,” said participant Hanna Tripp, who serves as a Military and Veteran Fellow in the Office of Congressman Joseph P. Kennedy, III.

Results from the summit’s working groups are currently being compiled into a more formal report which will be released in the next few weeks, but overall participants left the event feeling energized and hopeful, echoing Ms. Tripp’s comments.

“OUTVETS is honored to have been part of this amazing summit,” said Bryan Bishop, Commander of OUTVETS, a Boston-based LGBTQ Veterans Organization and the first ever LGBTQ organization to march in the Boston St. Patrick’s Day Parade.  “It never ceases to amaze me how, when we put our heads and hearts together, we can develop ideas that help the most vulnerable of our Veterans.  It is so important to remember that it is the one Veteran standing in front of us that is the most important.  This summit represents the beginning of an energized movement that works together to break down walls so no Veteran is left behind.”

Join us Tuesday, April 13 for Advocating for Survivors