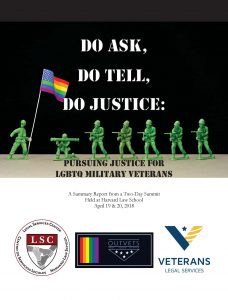 In collaboration with community partners OUTVETS, and Veterans Legal Services, LSC’s Veterans Legal Clinic recently released a report on how to fully honor the service of LGBTQ veterans, especially those who received less-than-fully honorable discharges from the military. The report summarizes the findings made by participants—including dozens of experts on LGBTQ military and veterans matters from the US and Canada—during a two-day summit at Harvard Law School in April 2018 on the unique issues faced by LGBTQ veterans.

As a result of decades of discrimination against LGBTQ servicemembers, enshrined in military policies like “Don’t Ask, Don’t Tell” and predecessor policies, more than 100,000 servicemembers were discharged prematurely based on their sexual orientation. These discharges not only impose profound stigma on LGBTQ veterans, they also have the potential to erect barriers that prevent LGBTQ veterans from receiving critically needed veterans benefits, healthcare, and supports. Despite the repeal of “Don’t Ask, Don’t Tell,” to this day thousands of LGBTQ veterans are still denied access to essential veterans services—with dire consequences for their mental and physical health, financial wellbeing, and peace of mind.  The Department of Defense’s procedures for changing a veteran’s discharge status remains totally reactive, requiring individual veterans to submit a detailed application rather than identifying and notifying veterans of applicable changes in standards. Once a veteran does apply, it can take between 12 to 18 months just to receive a response. The majority of LGBTQ veterans eligible—estimated to be as many as 92%—have not applied for a discharge upgrade.

Titled “Do Ask, Do Tell, Do Justice: Pursuing Justice for LGBTQ Military Veterans,” this report details the Summit’s findings about how to begin breaking down the considerable barriers LGBTQ veterans face as they pursue justice and access to essential services.  The report concludes that LGBTQ veterans, while far from a homogenous group, do face common challenges as a result of prior discriminatory policies enforced the U.S. military and their ongoing legacies. Many stakeholders are actively working to meet the needs of LGBTQ veterans, but greater coordination between organizations, institutions, and individuals is needed to ensure that all LGBTQ veterans seeking help or supports have meaningful access. The report recommends that current efforts should not just continue, but should be enhanced and expanded:

Advocates for and allies of the LGBTQ veterans community should not be satisfied with the status quo of well-intentioned but (thus far) unsuccessful attempts at federal legislation to remedy the effects of discriminatory discharge policies, nor with the low rate—just 8%—of eligible veterans who actually seek relief through discharge upgrade processes.

Read it here: Do Ask Do Tell Do Justice – Summit Report June 2018