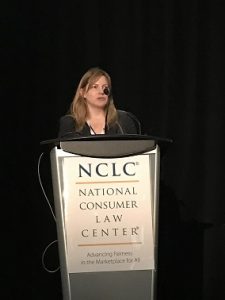 The Project on Predatory Student Lending’s Director of Litigation, Eileen Connor, has been selected for the 2017 “Rising Star” award from the National Consumer Law Center for her significant contributions to consumer law. Eileen’s award comes as a result of her Second Circuit victory in the case Salazar v. King. Her clients were defrauded by the predatory practices of the now-defunct Wilfred Beauty Academy.

Wilfred, a for-profit chain of cosmetology and business trade schools, came under government investigation in the 1980s for the misuse of student aid funds and the falsification of loan applications. The result of the investigation was an overwhelming amount of evidence proving Wilfred’s fraud in certifying students’ eligibility for loans. In 1996, the Department of Education found that Wilfred’s fraudulent practices were widespread and recommended that all Wilfred students who were improperly enrolled receive a loan discharge, reimbursement for money they had paid, and a restoration of their credit. Despite its own recommendation, the Department continued to collect on these loans, including through involuntary collection methods such as seizing tax refunds and garnishing wages.

The Second Circuit’s ruling cracks open the door to relief for defrauded borrowers by showing that, in carrying out each and every function related to the federal student loan program, the Department must at least follow the law and its own regulations.

Eileen’s tenacious advocacy was carried out over more than three years, including before an administrative agency, a district court, and the Second Circuit. Salazar is an important and unfortunately rare case that begins to rein in the lawless and harmful approach that the Department of Education takes with respect to the rights of defrauded student loan borrowers. In short, the recognition is well-deserved. The Project on Predatory Student Lending congratulates Eileen on the award and thanks her for her tireless and inspirational leadership. We look forward to celebrating her advocacy at the National Consumer Law Center’s Consumer Rights Litigation Conference this week.