Secretary Mabus highlighted our duty to care for servicemembers and veterans and to ensure that they receive the recognition and benefits that they so richly deserve. In particular, he noted that because many more of those wounded in action are surviving now than in the past, “They are going to need more rehab, more things, more systems, more help.” The Secretary praised DAV, the New England Center for Homeless Veterans, the Veterans Legal Clinic, and other veterans organizations for their work toward guaranteeing fairness and equity for all those who have served. The Secretary closed his speech by reciting the famous quote that those who serve their country “gave us their tomorrows, so we could have our todays,” to which he added that, for veterans, “we owe them their todays.”

Secretary Mabus’ speech also addressed a wide array of topics relating to servicemembers and veterans. The topics ranged from discharge upgrades for those separated under the now-repealed Don’t Ask, Don’t Tell policy to expanding opportunities for women in the Navy and Marine Corps. He repeatedly talked about bridging the transition from servicemember to veteran. He acknowledged that the process of reintegration into civilian life is not always smooth and discussed his Department’s policies and initiatives that seek to ease that transition. Following his remarks, Secretary Mabus answered a variety of questions from the audience, which included many active duty servicemembers, veterans, community leaders, students, and others. 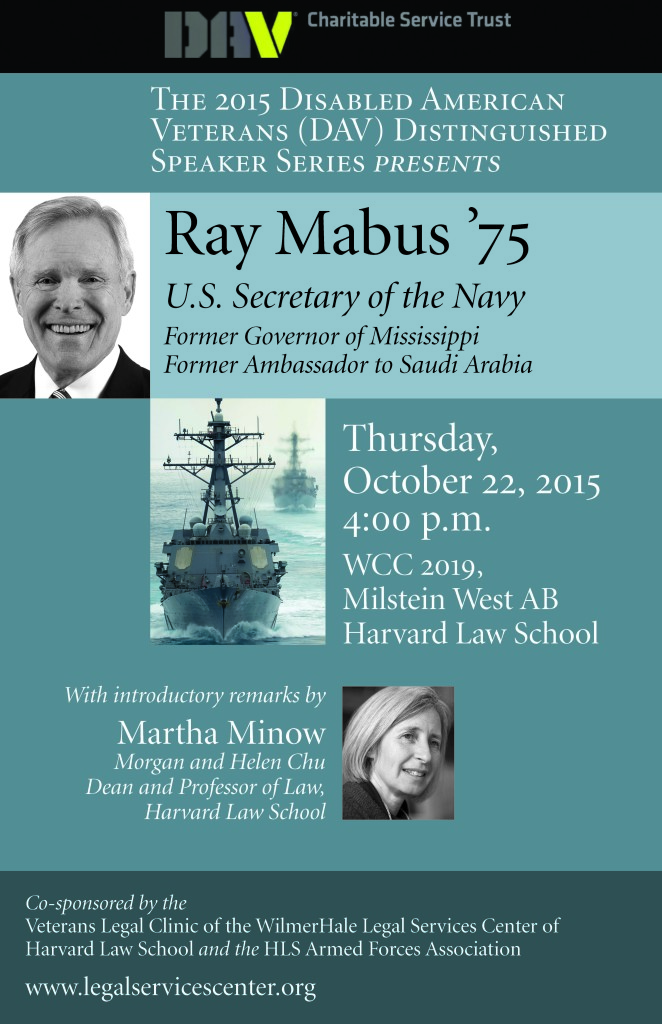 The Secretary was introduced by Martha Minow, Morgan and Helen Chu Dean and Professor of Law at Harvard Law School. Dean Minow praised the Secretary, who is a graduate of Harvard Law School, for his remarkable accomplishments and his long career of public service.Secretary Mabus answered a variety of questions from the audience, which included many active duty servicemembers, veterans, community leaders, students, and others.

Commenting after the speech, Daniel Nagin, Director of the Legal Services Center, stated, “Secretary Mabus is an extraordinary public servant and champion of our servicemembers and veterans. We are honored to host him as the 2015 DAV Distinguished Lecturer at the Law School, and deeply grateful to DAV for its sponsorship of this important speaker series.  Secretary Mabus’ powerful message about the duty we owe disabled veterans is one we must collectively heed.”

Supported by a generous grant from the Disabled America Veterans (DAV) Charitable Service Trust, the DAV Distinguished Lecture Series provides an annual forum at the world’s most renowned university and law school for public servants and thought leaders to speak on issues of importance to the nation’s veterans. The series recognizes leading figures in the veterans’ community, raises awareness about the needs of veterans, sparks discussion about the public policies that most impact veterans, particularly those with service-connected disabilities, and serves as a call to action for veterans and non-veterans alike to help ensure the nation honors its commitments to those who have served.  The inaugural DAV Distinguished Lecture was delivered in 2014 by U.S. Secretary of Veterans Affairs Robert McDonald.

Further coverage of the event was published by the Harvard Crimson and Harvard Law Today.